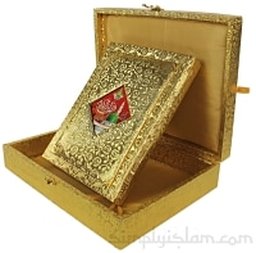 The Tajweed Rule allows the reciter to emphasize the accent, phonetics, rhythm and temper of the Qura'nic recitation. But most of the people don't know tajwid rules. The idea behind this concept is to color the word’s letter that contains a Tajweed rule, so as the reader recites the Quran; he/she will be able to apply the correct Tajweed rule through the color of the letter. This Quran is also ideal for students of hifz who will easily recognise the various rules of tajweed. However, those who know tajwid rules or can learn it easily should read in a black & white Quran.
Red: indicates Ghummah (nasal sound).
Green: indicates the heavy letters
Blue: used for letters to be pronounced with Qalqalah (echoing sound)
Powered by